In a world full of injustice, it’s important for kids to hear stories of brave people fighting to better the world for themselves and others. Here are 3 great picture books that tell true stories of inspiring social activism!

Brave Girl: Clara and the Shirtwaist Maker’s Strike of 1909 by Michelle Markel, illustrated by Melissa Sweet

Brave Girl: Clara and the Shirtwaist Makers’ Strike of 1909

by Michelle Markel, illustrated by Melissa Sweet is based on the influential actions of Clara Lemlich, a young Ukranian immigrant to America who spoke primarily Yiddish and fought tirelessly for workers rights. Appalled by the inhumane conditions, low pay, and general abuses, Clara inspired and organized other garment factory employees (80% of whom were women) to fight for their rights via worker’s strikes. Although young, female and small in stature, Clara was instrumental to the events that led to improved workers’ rights that we still enjoy today. Written in language accessible to children, it broaches dark realities of social injustice: the imbalance of power between the rich and poor, the exploitation of immigrants, and the potential for abuses of the law. Then it shows the power of collective effort to create meaningful change. The book also opens doors for many important conversations:

Bonus: the book closes with a spread that provides more historical information and references.

You can read more about Clara Lemlich and garment factories at the turn of the 20th century at the PBS website.

The surprise is dirt poor, just five feet tall, and hardly speaks a word of English. Her name is Clara Lemlich. This girl’s got grit, and she’s going to prove it. Look out, New York!

But Clara is uncrushable. She wants to read, she wants to learn! At the end of her shift, though her eyes hurt from straining in the gaslight and her back hurts from hunching over the sewing machine, she walks to the library. She fills her empty stomach with a single glass of milk and goes to school at night. When she gets home in the last evening, she sleeps only a few hours before rising again. 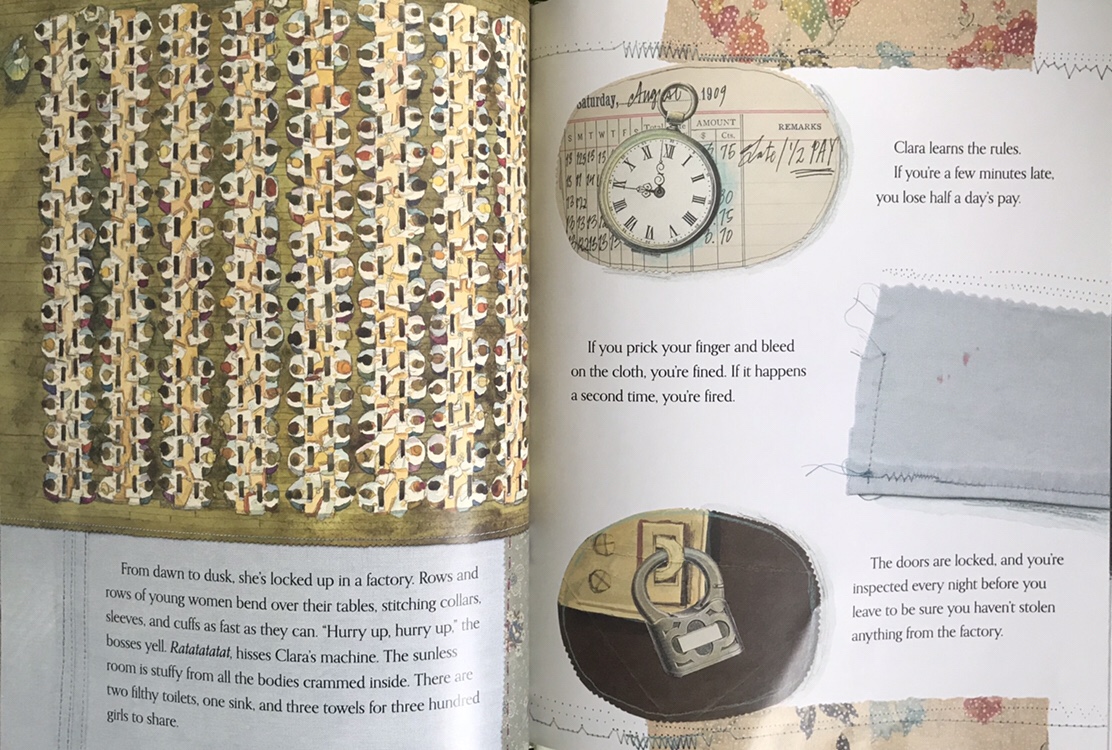 From dawn to dusk, she’s locked up in a factory. Rows and rows of young women bend over their tables, stitching collars, sleeves, and cuffs as fast as they can. “Hurry up, hurry up,” the bosses yell. Ratatatatat, hisses Clara’s machine. The sunless room is stuffy from all the bodies crammed inside. There are two filthy toilets, one sink, and three towels for the three hundred girls to share. Clara learns the rules. If you’re a few minutes late, you lose half a day’s pay. If you prick your finger and bleed on the cloth, you’re fined. If it happens a second time, you’re fired. The doors are locked, and you’re inspected every night before you leave to be sure you haven’t stolen anything from the factory.

That’s right—Clara. She calls out from the front of the hall. The crowd lifts her to the stage where she shouts in Yiddish: “I have no further patience for talk—I move that we go on a general strike!” And she starts the largest walkout of women workers in U.S. history.

And they do. All winter long, in the bitter cold, in their cheap, thin coats, tired and starving and scared, the girls walk alongside the men on the icy sidewalks of the picket line. They spill out of the union halls, blocking the roads, filling the street corners and public squares. Newspapers write stories about them. College girls raise money for them. Rich women—swathed in fur coats—picket with the factory girls. By the time the strike is over, hundreds of bosses agree to let their staff form unions. They shorten the workweek and raise salaries. The strike emboldens thousands of women to walk out of garment factories in Philadelphia and Chicago.

Light in the Darkness: A Story About How Slaves Learned in Secret by Lesa Cline-Ransome, illustrations by James E. Ransome

Light in the Darkness: A Story about How Slaves Learned in Secret

by Lesa Cline-Ransome, illustrated by James E. Ransome, follows a young girl and her mother in their secret pursuit of literacy. Because reading or making an effort to read was prohibited and mercilessly punished by whipping, the lessons are held late at night in pit schools dug deep in the ground with roofs camouflaged to look like bushes. Told from Rosa’s perspective, we learn about their dangerous path to the pit school and back, the piercing awareness of danger, and the resourcefulness of those desperate to learn. The book is written in language easily understood by children and beautifully contrasts Rosa’s intelligent, thoughtful inner experience with the Master’s prejudiced perceptions of slaves. In the face of tremendous adversity, Rosa maintains courage, hope, resilience, and her humanity. And while Rosa may be a fictional character, these pieces of her story remain true. Based on historical slave accounts of pit schools, this book opens doors for important conversations about a variety of topics:

Bonus: the book closes with references for further reading. You can read more information about pit schools in this the NY Times article. 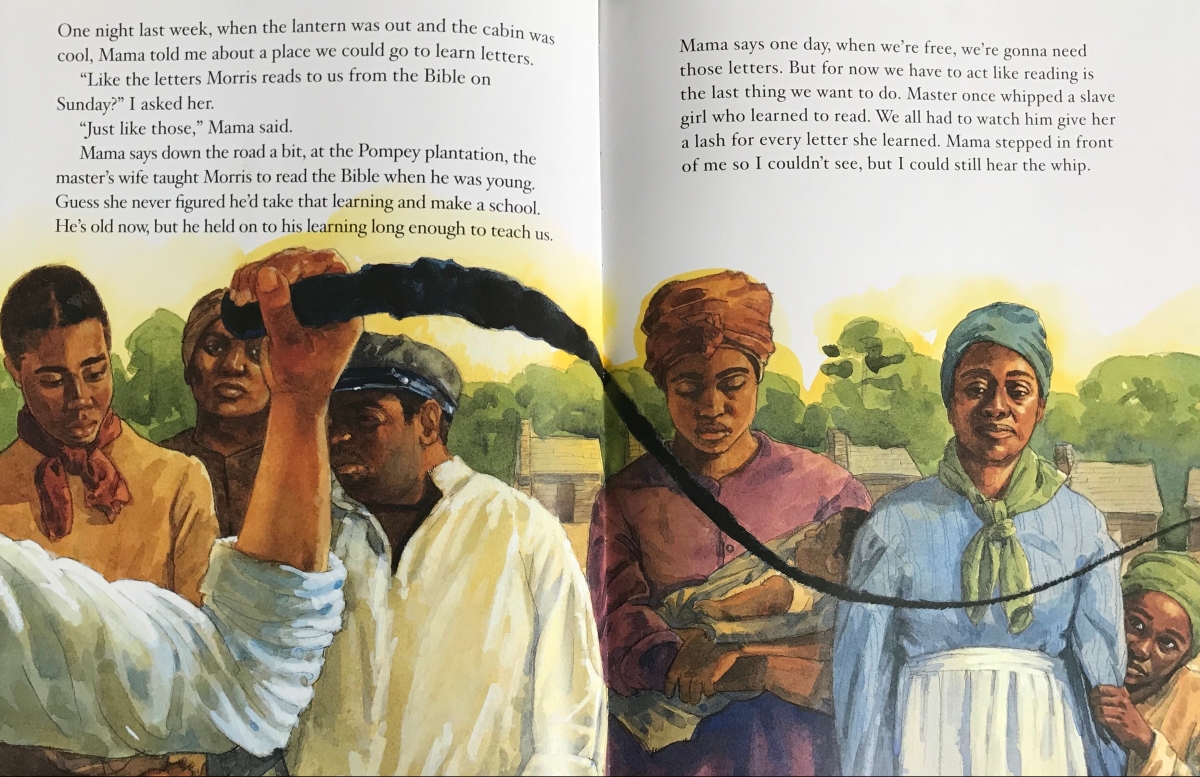 One night last week, when the lantern was out and the cabin was cool, Mama told me about a place we could go to learn letters. “Like the letters Morris reads to us from the Bible on Sunday?” I asked her. “Just like those,” Mama said. Mama says down the road a bit, at the Pompey plantation, the master’s wife taught Morris to read the Bible when he was young. Guess she never figured he’d take that learning and make a school. He’s old now, but he held on to his learning long enough to teach us. Mama says one day, when we’re free, we’re gonna need those letters. But for now we have to act like reading is the last thing we want to do. Master once whipped a slave girl who learned to read. We all had to watch him give her a lash for every letter she learned. Mama stepped in front of me so I couldn’t see, but I could still hear the whip. 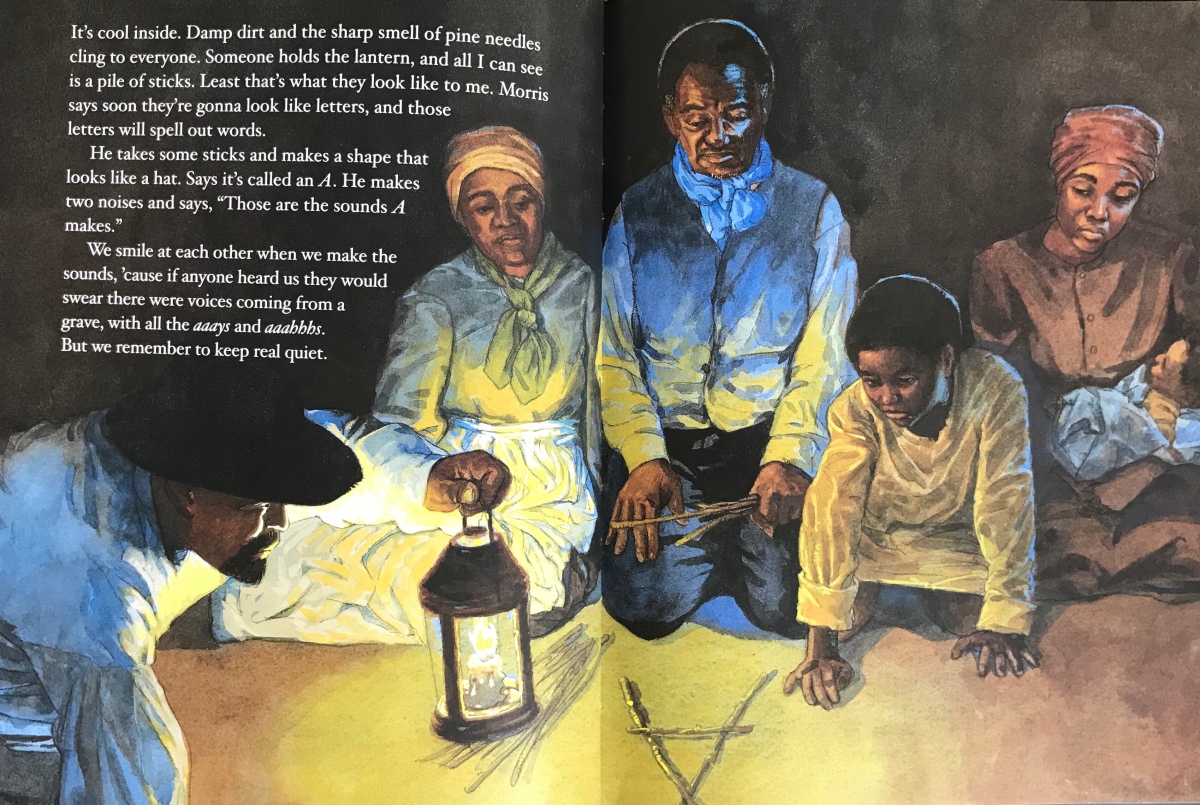 It’s cool inside. Damp dirt and the sharp smell of pine needles cling to everyone. Someone holds the lantern, and all I can see is a pile of sticks. Least that’s what they look like to me. Morris says soon they’re gonna look like letters, and those letters will spell out words. He takes some sticks and makes a shape that looks like a hat. Says it’s called an A. He makes two noises and says, “Those are the sounds A makes.” We smile at each other when we make the sounds, ’cause if anyone heard us they would swear there were voices coming from a grave, with all the aays and aaahhhs. But we remember to keep real quiet. 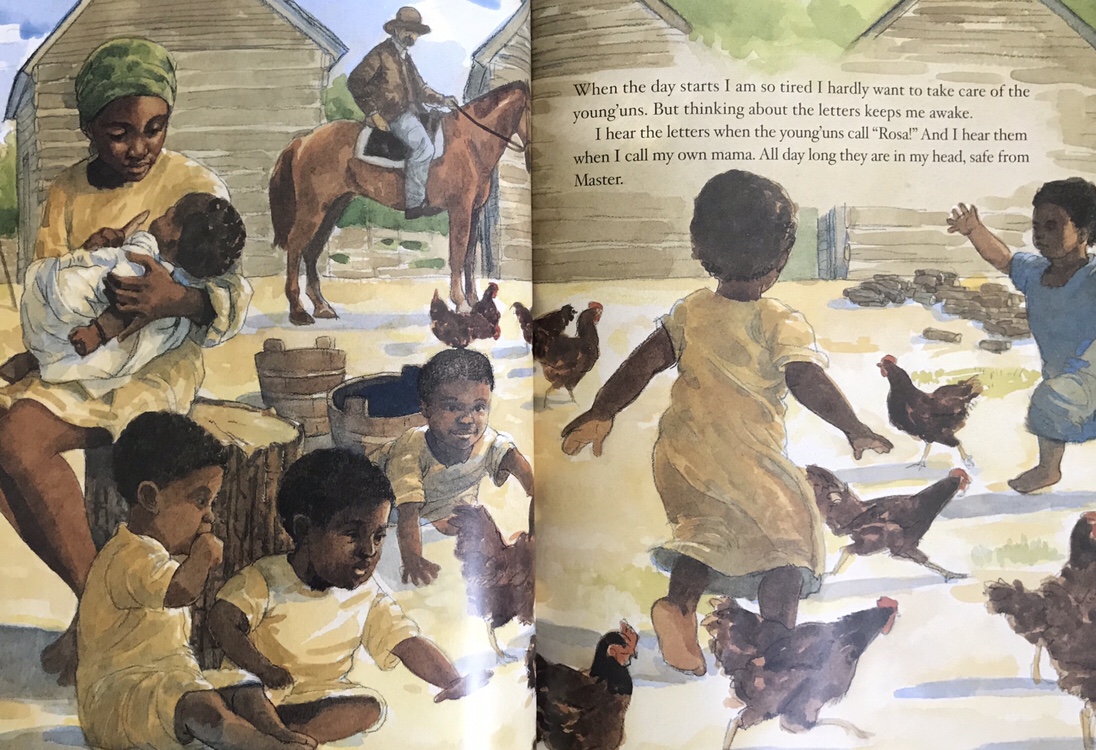 When the day starts I am so tired I hardly want to take care of the young’uns. But thinking about the letters keeps me awake. I hear the letters when the young’uns call “Rosa!” And I hear them when I call my own mama. All day long they are in my head, safe from Master.

Feels like I can’t make my body hold still anymore. If we wait much longer, the sun’ll be up. “Let’s try over by Ramsey’s farm,” a man says finally, close enough so we can hear. “Ain’t nothing here.” The hoofbeats start to move away. One by one we all start breathing. Morris says we may need to move the school or wait a while before we meet again. The next day we hear two field hands talking. “The patrollers caught two of ’em coming back early in the morning. Their massa whipped ’em so bad, one of ’em near bleed to death.” Mama’s body gets as hard as wood. Ain’t no one gonna come to school now. Folks just too scared or just too tired of trying. 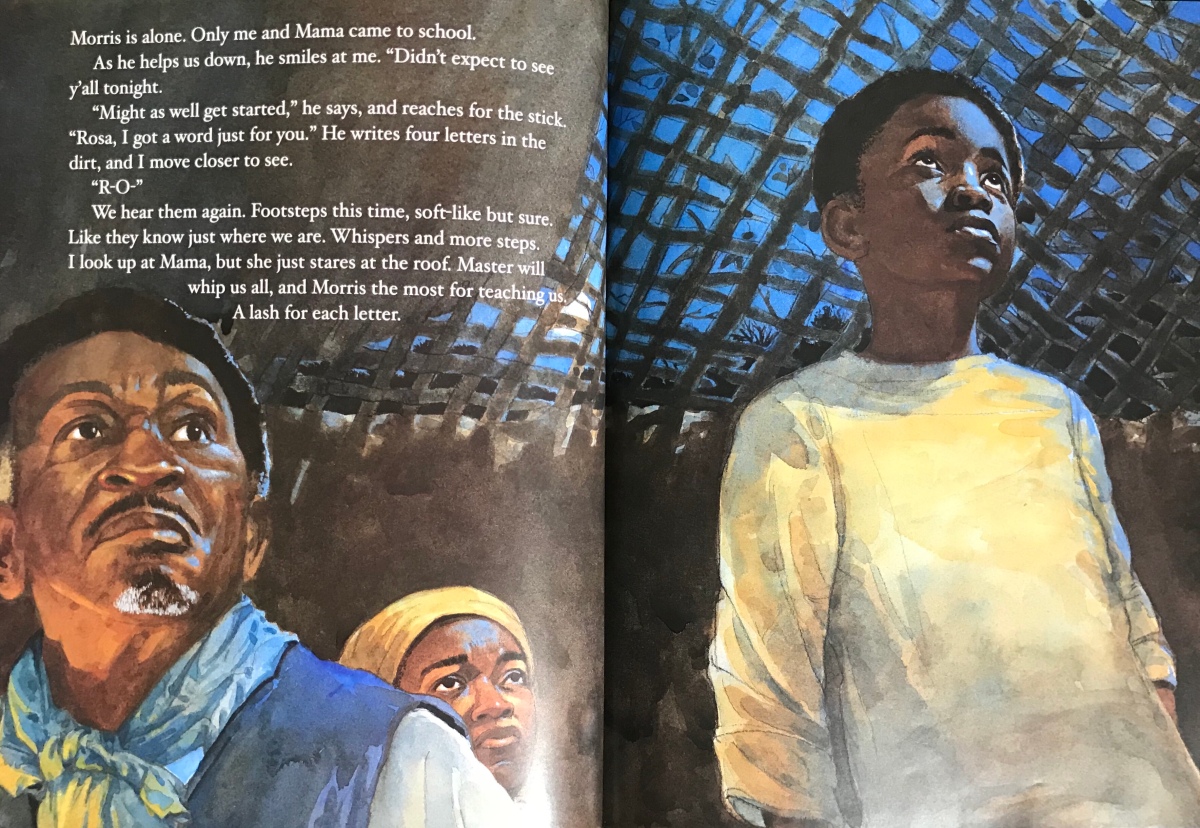 Morris is alone. Only me and Mama came to school. As he helps us down, he smiles at me. “Didn’t expect you to see y’all tonight. “Might as well get started, “he says, and reaches for the stick. “Rosa, I got a word just for you.” He writes four letters in the dirt, and I move closer to see. “R-O-” We hear them again. Footsteps this time, soft-like but sure. Like they know just where we are. Whispers and more steps. I look up at Mama, but she just stares at the roof. Master will whip us all, and Morris the most for teaching us. A lash for reach letter.

by Emma Otheguy, illustrated by Beatriz Vidal recounts the story of Cuban journalist, poet, essayist, political activist, and martyr José Martí and his tireless fight for Cuban independence. Written in parallel columns, the first in English and the second in Spanish, the text recounts key portions of his life while also incorporating portions of his collection of poetry, Versos Sencillos. We learn of his pursuit for the abolition of slavery in Cuba, political imprisonment in a labor camp, fight for democratic self-governance, political exile, immigration to New York, promotion of Cuban independence, and death in the The Cuban War for Independence. Martí’s story teaches the power of the written word, and the difference one dedicated person can make even from afar. This book is a great foundation for introducing Cuban history in addition to broader topics such as:

Bonus: the Afterward includes a more detailed biography of José Martí followed by the selected excerpts from Versos Sencillos and selected bibliography.

You can read more about José Martí at the Encyclopaedia Britannica.

The Spanish fought hard to keep Cuba because the sugar grown by enslaved people made them wealthy. Jose didn’t care about money and being rich. He loved Cuba and all of the its people. Jose wrote for newspapers and handed out pamphlets declaring that the Spanish were cruel and that Cuba should be free! His words made the Spanish furious. Give the vain main his costly gold that sparkles and burns in the fire: to me, give me the endless forest when the sun shines through.

But Jose’s song could not be silenced. Jose would continue to fight for Cuba’s independence! He traveled from country to country, to speak about Cuba and his wish for democracy. Jose settled in Nueva York, where he gave speeches and wrote newspaper articles, and joined forces with workers to support Cuba’s fight. Wherever he went, Jose was inspired to find people who also believed in equality and liberty. I come from every place, and I’m on the road to everywhere: I am art amid the arts, and in the mountain chain, a link.

But Spain ruled the island and wouldn’t let Cubans into the government. Spain didn’t respect the diversity of the Cuban people—Spanish, African, Chinese, indigenous, some a mix of all of those—or their demands for fair treatment. In 1868, the Cuban people started a war to gain independence from Spain.