As a Latina of Cuban parentage raised in New York, your life has been a blend of two languages, two cultures, and two homelands—in many ways similar to Jose Marti. Was his a story that you learned as a child? What inspired you to share his story with young readers in picture book format? 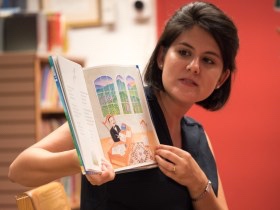 I don’t remember a time when I didn’t know about José Martí. My parents are Cuban, and so my childhood was filled with Martí: we read his children’s stories, such as Los zapaticos de rosa, and listened to Celiz Cruz singing “Guantanamera” with words from Martí’s Versos sencillos. My father grew white roses in our yard and taught my sister and I to recite “Cultivo una rosa blanca.”

I wanted to write this book from the moment I found out that Martí had visited the Catskill Mountains. I only discovered this detail as an adult, when I was working in upstate New York, in the Hudson Valley. Learning that Martí, too, had spent time in the region, and even been inspired to write his famous poems Versos sencillos in the Catskills, gave me a sense of belonging and helped me bridge the distance between my Latino family and the wider world.

is written in parallel English and Spanish, communicating an equality and unity between the two languages. Was this a response to the currently divisive political environment? What do you hope bilingual children take away from seeing the languages simultaneously, rather than having to find the book in translation?

The bilingual book format reflects my own family back to me: some of us speak English, some of us speak Spanish, some of us speak a mix of both, but we are all one family, just like the languages of this book are between the same two boards. It’s not like our language identities are separate from one another. I hope that many other Latinx readers will feel similarly.

Your past pursuits have given you experience teaching children in an academic setting as an elementary school Spanish teacher, a hands-on setting as an instructor at a farm-based education program, and in a literary setting at a bookstore. How did these experiences shape the way you approached writing Martí’s Song for Freedom

? Did it influence your choice to incorporate his poetry throughout the text rather than as an addendum?

I knew from my previous work with children that Martí’s life story and poetry would lend themselves well to the picture book format. I knew children would identify with Martí’s innate sense of justice and the passion he expressed even from a young age, and once I began weaving Martí’s words into the text, the rhythm just felt right.

Readers will be excited to learn you have a second picture book coming out this fall: Pope Francis: Builder of Bridges

. You are a Ph.D. candidate in History at New York University, focusing on Spain and colonial Latin America. Did your graduate work influence your choice of José Martí and Pope Francis as subjects? What do you hope young readers take away from this second book?

I’ve been lucky that my scholarly work and my children’s writing have been able to feed one another: right now, everything I’m working on explores the history and culture of Latin America, what it means to be Latinx, and the ways in which distant places are intertwined. As a Cuban-American, writing about José Martí made sense to me on both a scholarly and personal level, and I was thrilled that Lee & Low responded so enthusiastically to the idea. For the Pope Francis book, I was actually approached by Bloomsbury to write the book, but it fit with my broader work on Latin American history.

You are a member of the Bank Street Writers Lab, an organization whose stated mission is “to encourage the writing of children’s literature that shows an understanding and appreciation of the language of growing children, is aware of and responsive to children’s real and imagined worlds, and affirms the social and cultural heritage of every child.” What do you feel the benefits of this experience have been? How has it differed from participation in a critique group?

The Writers Lab and the Bank Street Center for Children’s Literature more broadly have offered me important opportunities to connect with other writers, as well as some of the brilliant librarians and educators at Bank Street. The Writers Lab operates very similarly to a critique group for published authors.

This summer you are serving as an instructor for the Highlight’s Workshop: Master Class in Writing Nonfiction for Children and Young Adults 2018 (July 15-July 19, 2018). It’s often said that teaching something is the best way to learn it. How has preparing for this workshop influenced your craft?

I was very lucky that the Highlights Foundation supported my career very early on by offering me scholarships to attend workshops that I could otherwise not afford. I learned a lot from the in-depth instruction that happens at Highlights, and I’m excited to return as a faculty member this summer and share some of what I have learned about writing non-fiction for children.

​ What do you hope participants take away from the workshop?​

I hope participants will leave with a few new resources for non-fiction research, an understanding of the responsibilities of a non-fiction author when representing different groups in history, and a feeling of enthusiasm to return to their independent writing projects after the workshop.