This week I’m sharing 3 fantastic, interactive books about vehicles and how people use them. 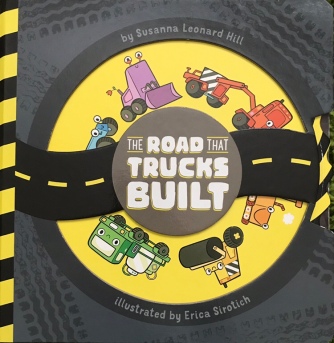 The Road That Trucks Built by Susanna Leonard Hill, illustrated by Erica Sirotich

The Road That Trucks Built

Follow along as a team of construction trucks build a new road! Cranky congestion turns into a delightful grand-opening fete following the efforts of a six-truck construction team: bulldozer, scraper, grader, paver, roller, and paint marker. The job of each truck is described and illustrated with each adorable image conveying the text’s meaning and a general attitude of teamwork. The second half of the book reviews each truck’s role, and the final spread is a diagram with all six trucks and their most interesting features labeled. An interactive cover, rhyming text, and charming illustrations make this a book with appeal for all kids.

I have to note, this is probably my truck-obsessed son’s very favorite book. He has memorized the text. He snuggles the pages. He reads it to himself while driving trucks on top of it. That being said, my daughter also loves this book and it has fallen victim to several bouts of tug-o-war. Thank goodness for tape!

This is the traffic that’s moving too slow. Cars and buses have nowhere to go. What is the answer? I’m guessing you know.

This is the SCRAPER whose sharp metal blade forges a new path through forest and glade to make way for the road that trucks built.

This is the ROLLER with steel drums so great they flatten the asphalt till it’s smooth as slate to make way for the road that trucks built. 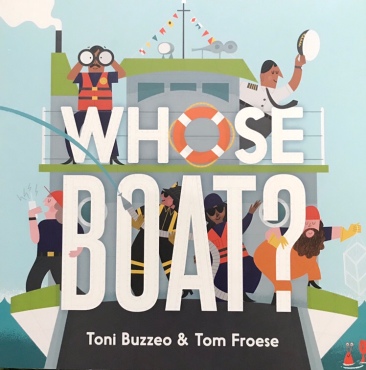 Whose Boat? by Toni Buzzeo, illustrated by Ton Froese

follows the same format as Whose Truck?

from the same series. Written in a question-answer format, each spread starts with a general description of the boat’s task paired with an image detailing its most interesting features. Opening a flap then reveals whose boat it is and shows an image of the boat’s crew in action.

Although vehicle focused books abound, there aren’t many dedicated to boat varieties, jobs or their functional components, which makes this book especially interesting. Covering five different boats, there’s just enough detail to learn lots of new information without overwhelming young readers. My favorite feature, though, is that the images depict men and women of different backgrounds performing the associated jobs, sending a message inclusivity and equality.

Overall, these are beautiful, educational books that are instant hits at story time, and  Whose Boat?

is an excellent addition to an already stellar series! 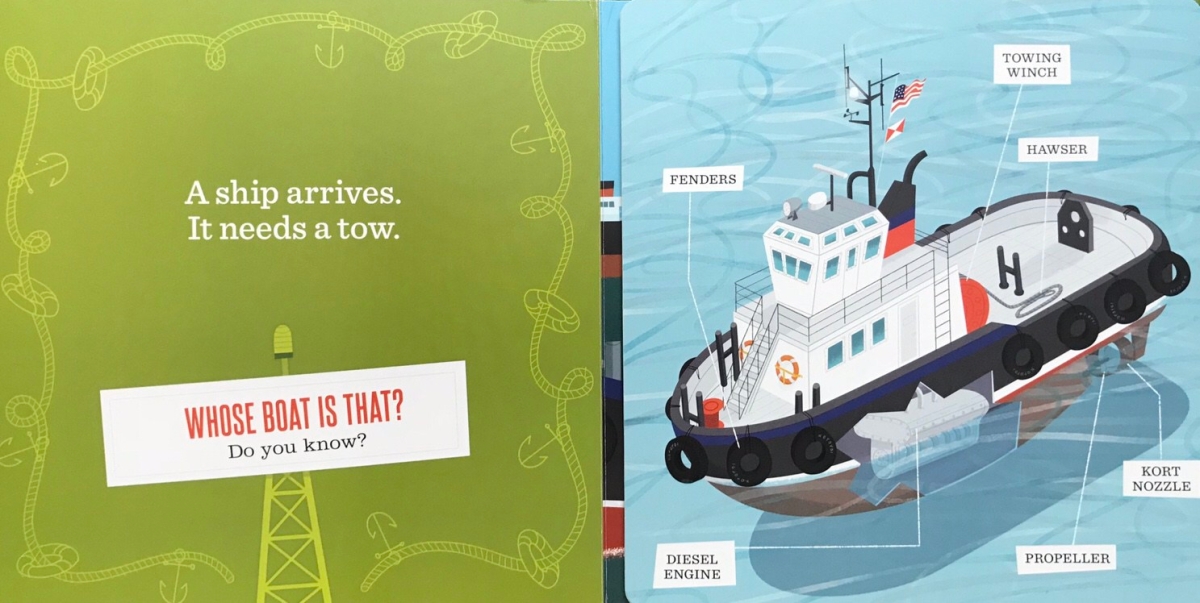 A ship arrives. It needs a tow. Whose boat is that? Do you know? 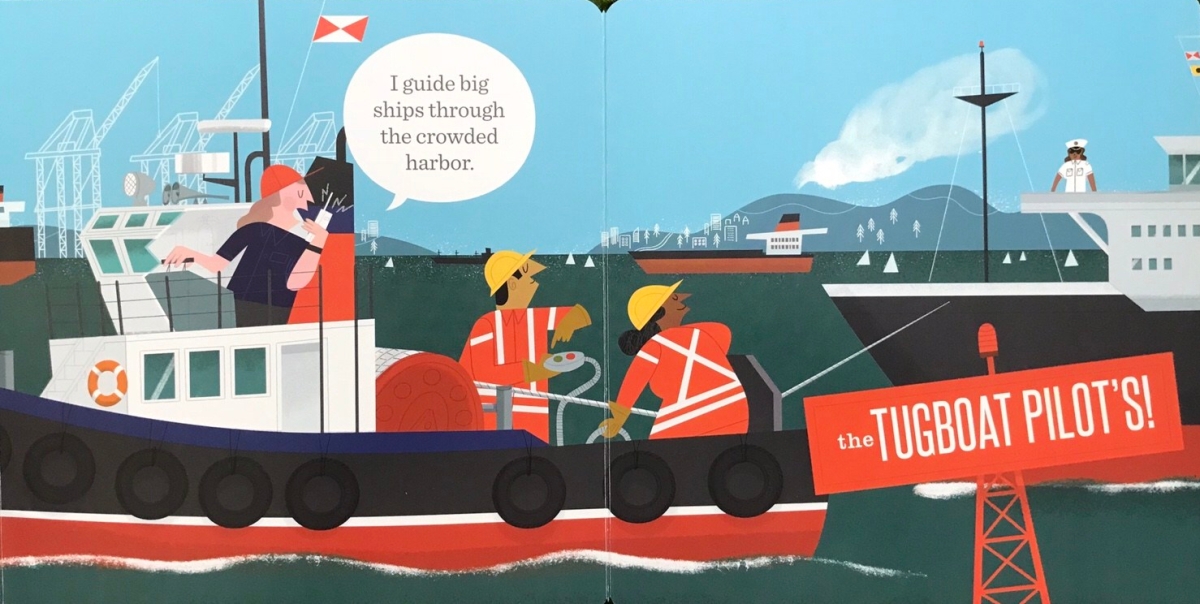 “I guide big ships through the crowded harbor.” The Tugboat Pilot’s!

The Car Ferry Captain’s! “I move cars and drivers from shore to shore.”

Smoke billows up. Cool water flows. Whose boat is that? Do you know?

On the Go by Sarah Powell, illustrated by Dan Green

Lift-the-Flap Tab: On the Go

Targeted at younger readers, this is an excellent introduction to eight vehicle varieties and the different roles they play in our society.

Each spread is dedicated to a unique vehicle with a specific role. Expository text provides short functional descriptions and associated facts about how the vehicle is used. Multiple flaps on each page reveal additional text that highlights the vehicle’s structure and operators.

Engaging images and easily manipulated flaps make for instant appeal with young kids. As a parent, I especially like that there’s a variety of men and women operating the vehicles. Overall, this book is loved by both my children, and has held up well to frequent readings by less-than-gentle hands!

Freight Train Freight trains transport heavy goods across the land, day and night. The train cars carry many different types of cargo. The signals direct the train so it stays on the right track. Train tracks can run for hundreds of kilometers.

Rescue Helicopter Rescue helicopters help save people in accidents that other emergency services cannot reach. The tail rotor helps the helicopter to turn with great control. This sailboat got into difficulty and called the coastguard for help. The blades spin very fast on a rotor, which allows the helicopter to hover in one spot.

Jumbo Jet The jumbo jet flies all over the world, taking people to places near and far. The body of a plane is called the fuselage. The wings are big and strong to help lift the jumbo jet into the air. Jet engines are really fast and powerful.