Teach kids to embrace their individuality with these three fantastic picture books!

We Are All Different by Miranda Mittleman, illustrations by Indos Studios

PAWS and THINK! We Are All Different

This second installment in the PAWS and THINK! series follows rescue dog Weaver at the local dog park. While watching the other dogs, he observes that each has a different appearance. But outward appearances don’t have any impact on the ability to play and have fun together. Each day he meets another unique-appearing dog who then becomes a friend. In the end he encourages kids to remember that we are all different when meeting someone new.

Bright, cheerful illustrations of adorable dogs are eye catching and engaging. Straight forward text sends a message that is easily followed and internalized by young readers — my youngest now often tells me “I am different, too!”.  And the depiction of various breeds makes an easily understood metaphor about how we can each be human, yet look very different from one another. Overall, this is a great book for talking to young readers about identifying and embracing individuality.

But why do I look so different from the others? No one else has my spots or my colors. 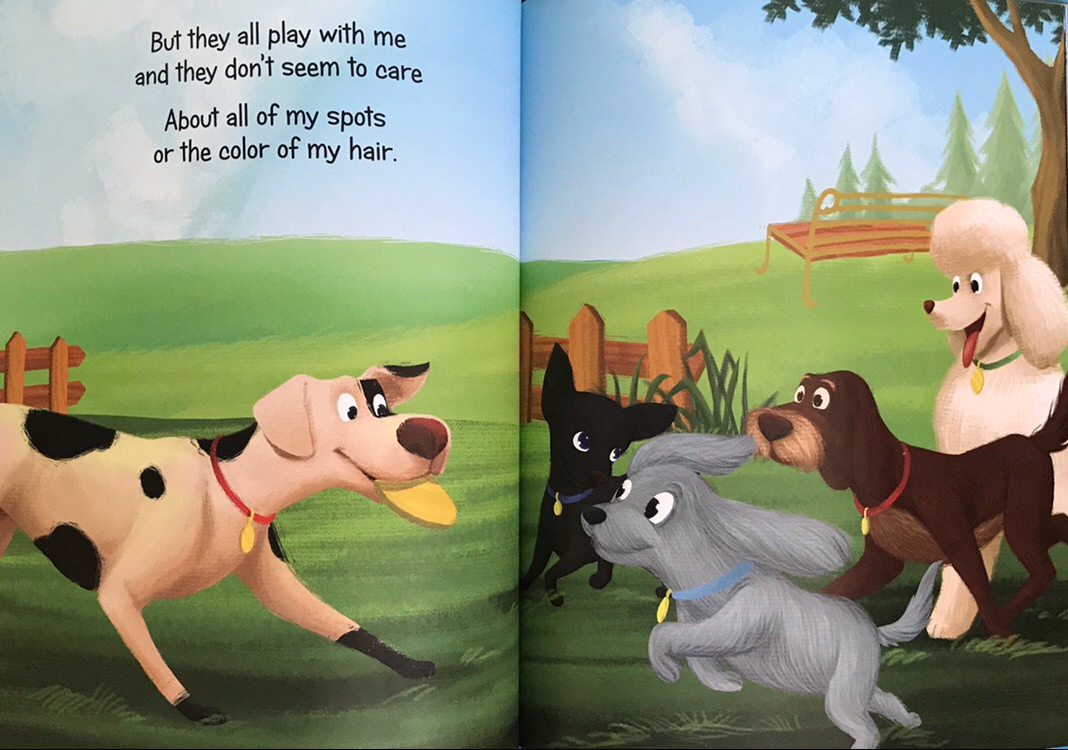 But they all play with me and they don’t seem to care about all of my spots or the color of my hair. 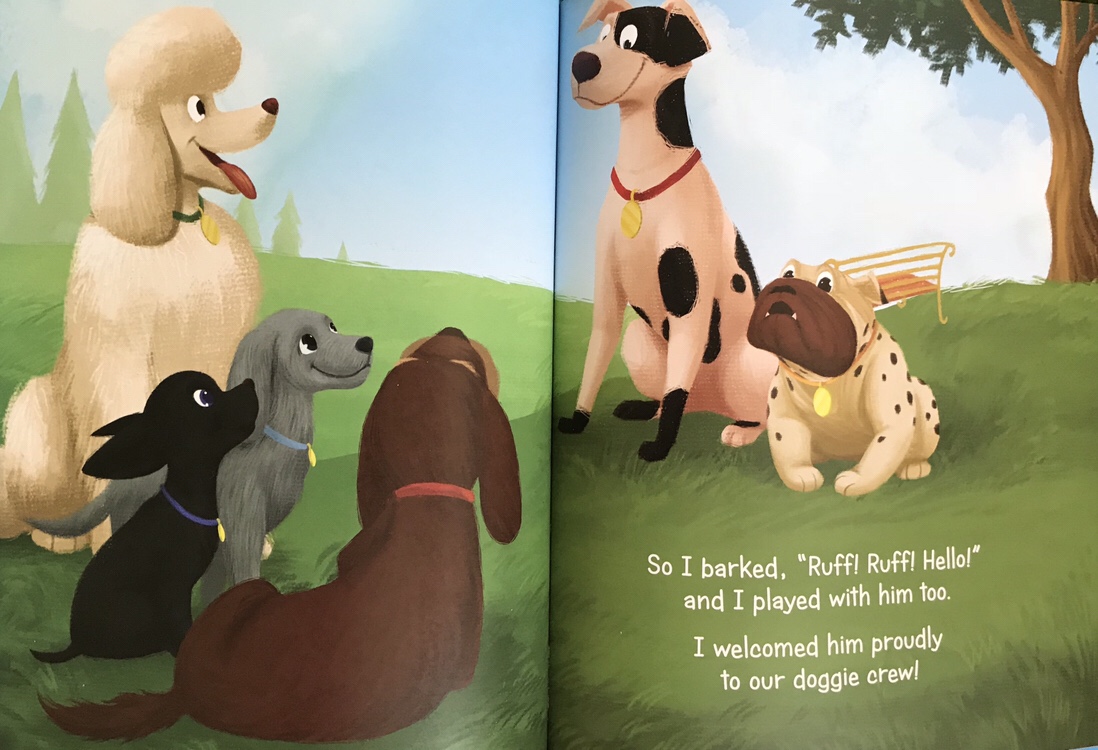 So I barked, “Ruff! Ruff! Hello!” and I played with him too. I welcomed him proudly to our doggie crew! 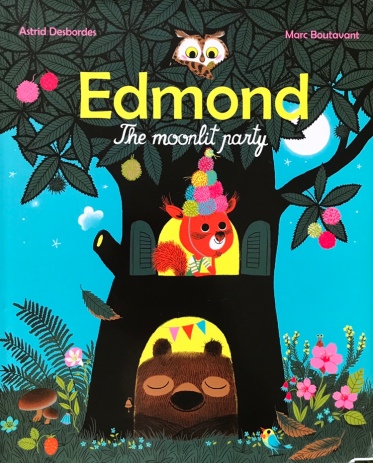 Edmond is the squirrel resident of a large oak tree that also houses George the owl and Harry the bear. Each of these animals has a unique personality with individual interests and talents. Edmond prefers spending his time alone pursuing pompom and jam making. But neighborhood excitement about Harry’s much-anticipated party sparks longings for friendship. Eventually, with the encouragement and support of George the owl, Edmond attends his first party. Warmly welcomed, he has a wonderful time and goes to bed happily contemplating the joys of friendship.

Vibrant, energetic, and delightfully fun art makes this book a family favorite. Detail-rich scenes enrich the story as we learn about each of these very different friends. With a wide variety of character traits on display — introverted, extroverted, creative, quirky, adventurous, cautious — there’s something here for every reader. And the best piece of the book is seeing these unique individuals enjoy each other’s company and appreciate each other’s talents. Overall, this is a book that celebrates individuality and sends a message that the world is a better place specifically because we are each unique. 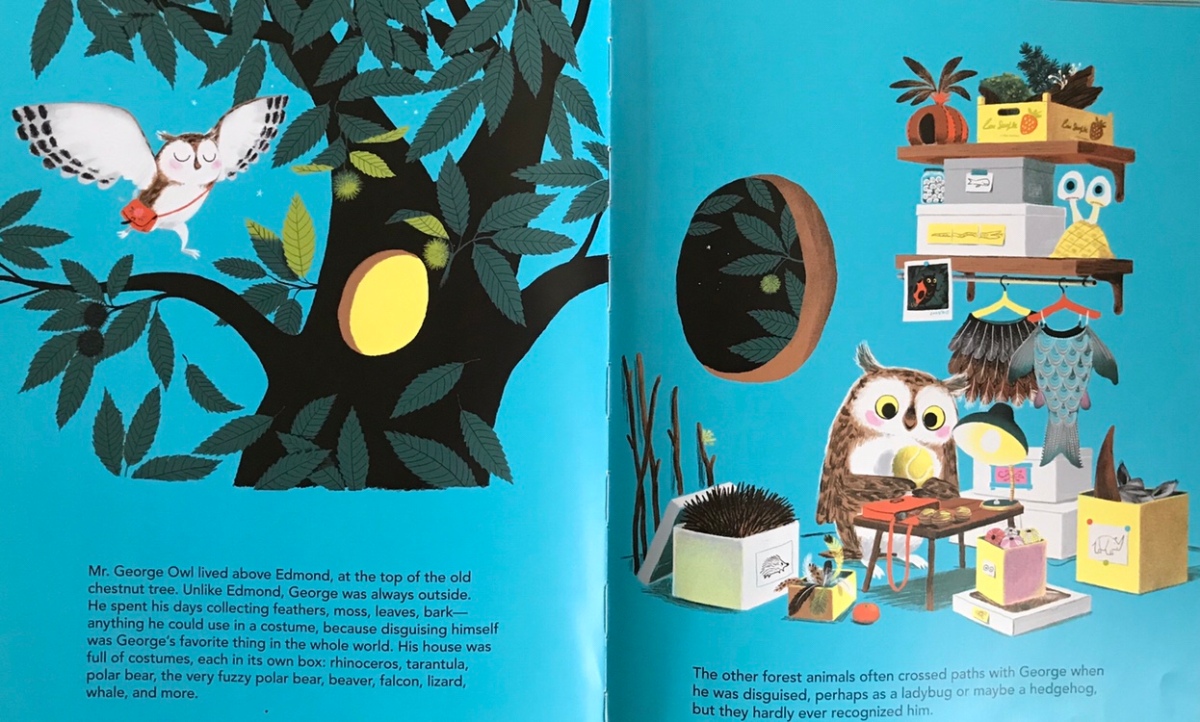 Mr. George Owl lived above Edmond, at the top of the old chestnut tree. Unlike Edmond, George was always outside. He spent his days collecting features, moss, leaves, bark — anything he could use in a costume, because disguising himself was George’s favorite thing in the whole world. His house was full of costumes, each in its own box: rhinoceros, tarantula, polar bear, the very fuzzy polar, beaver, falcon, lizard, whale, and more. The other forest animals often crossed paths with George when he was disguised, perhaps as a ladybug or maybe a hedgehog, but they hardly ever recognized him.

The night of the party arrived at last, and a crowd gathered at the foot of the old chestnut tree. This time, Edmond really wanted to go. Just to see. But I really shouldn’t, he thought. That’s a crazy idea. I’ll just make a little jam instead. He arranged his things at the stove and opened the window so he could hear the party.

The party continued late into the night. Edmond danced with Ladybug and talked with Harry. Between bites of nothing tart, Ant asked the seagull what the vast emptiness of sea and sky was like. (Because it’s so mysterious… this emptiness!) And the seagull asked the other guests to tell him about Mr. George Owl. (Because he’s so mysterious… this George!) Then everyone had a good laugh when Edmond told them that earlier in the evening he had wept salty tears into his jam pot. “But I don’t think that will happen again,” he smiled.

One of a Kind by Chris Gorman

In One of a Kind

by Chris Gorman (Nancy Paulsen Books, ages 5-8) we follow a young boy who revels in his individuality while also struggling with the sense of isolation that feeling different can bring. The text follows the boys thoughts as he ponders what it is that makes him different from other kids and laments feelings of loneliness. The tone then shifts to hopefulness as he observes that it only takes finding a few other kids who are “a little different too” to make a cohesive group.

Written and illustrated by the drummer of the Grammy-award nominated band Belly, it’s only natural that playing music is a big part of this boy’s identity. Bold, graphic art makes the book as individual and dynamic as its main character. Images of him joyfully playing music in a band with three other kids, each on a different instrument, give rise to the perfect metaphor for the message that “it’s great to be one of a kind together.” Sparse text conveys a storyline of universal experience that is balanced perfectly with art that stands out among picture books. Overall, this is a beautifully executed book that conveys an invaluable life lesson about embracing your individuality.

Or that I have fun marching to my own beat?

It can be lonely and frustrating!

It’s great to be one of a kind together.