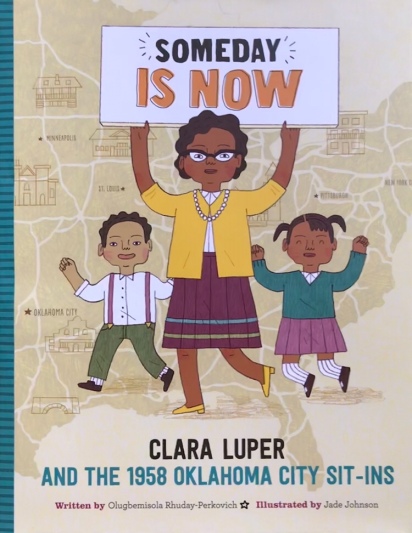 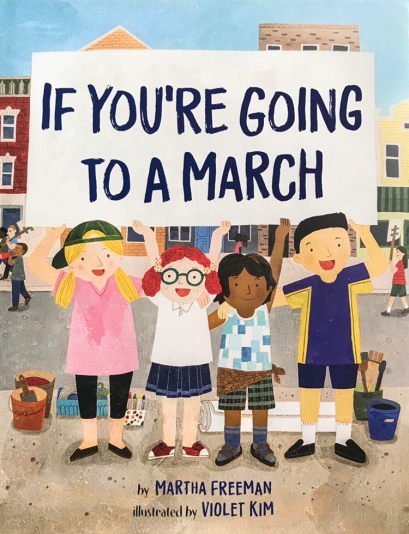 If You’re Going to a March by Martha Freeman, illustrated by Violet Kim 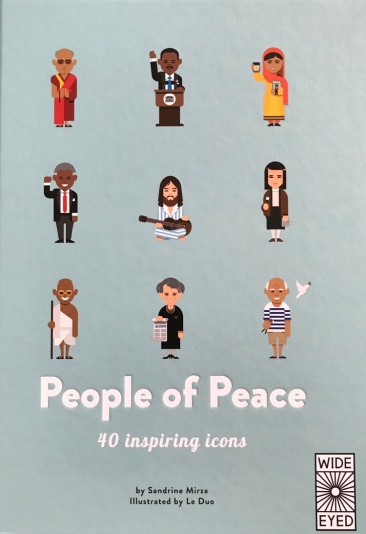 Someday Is Now: Clara Luper and the 1958 Oklahoma City Sit-ins

You are probably aware of the non-violent lunch counter sit-ins that prompted the desegregation of public spaces in the American south.  But do you know the history behind them?  Do you know the story of the remarkable educator, motivator, and activist behind some of the first sit-ins?

This book tells the story of how Clara Luper grew up dreaming of a day without segregation and eventually became one of the greatest forces toward that end.  Her approach was one of educating and inspiring students to follow her Steps of Nonviolent Resistance (Investigation, Negotiation, Education, and Demonstration).  We follow Clara from her childhood all-Black classroom with torn books and one person fulfilling the role of teacher, principal and janitor to the parks of New York City where she shows her own students a world of integration and freedom.  We read about how her students, inspired by their lessons about Dr. Martin Luther King and the Montgomery Bus Boycott, seek a path to creating change in their own community.  We learn about all the peaceful efforts to compel local businesses to abandon segregation that were made for over a year prior to the sit-ins.  And we see how Clara and her students (aged 6 to 17) endured disdainful treatment with dignity day after day until Katz drugstore announced that all of its lunch counters (38 stores across Missouri, Kansas, Iowa, and Oklahoma) would serve all people of every race.  The book then closes with more information about Clara’s remarkable life in addition to a detailed outline of her Steps of Nonviolent Resistance and a Glossary.

Someday is Now pairs superb writing with equally superb illustrations to effectively tell a complex and historically accurate narrative within the confines of a picture book.  Above and beyond this achievement, it highlights the work of a remarkable woman whose name should be familiar yet I suspect has been overlooked by history books for far too long.  Clara Luper’s dedication to educating children and promoting non-violent activism in her community is nothing short of inspirational.  She is the role model we need today, and I hope her story inspires many modern stories of nonviolent resistance.

Overall, this would be an excellent selection for any home, library, or social studies classroom.  It is a fantastic introduction to discuss race, intolerance, and injustice with kids.  And it’s the perfect companion book to lessons about racial injustice and the power of ordinary citizens to create meaningful change via non-violent means. 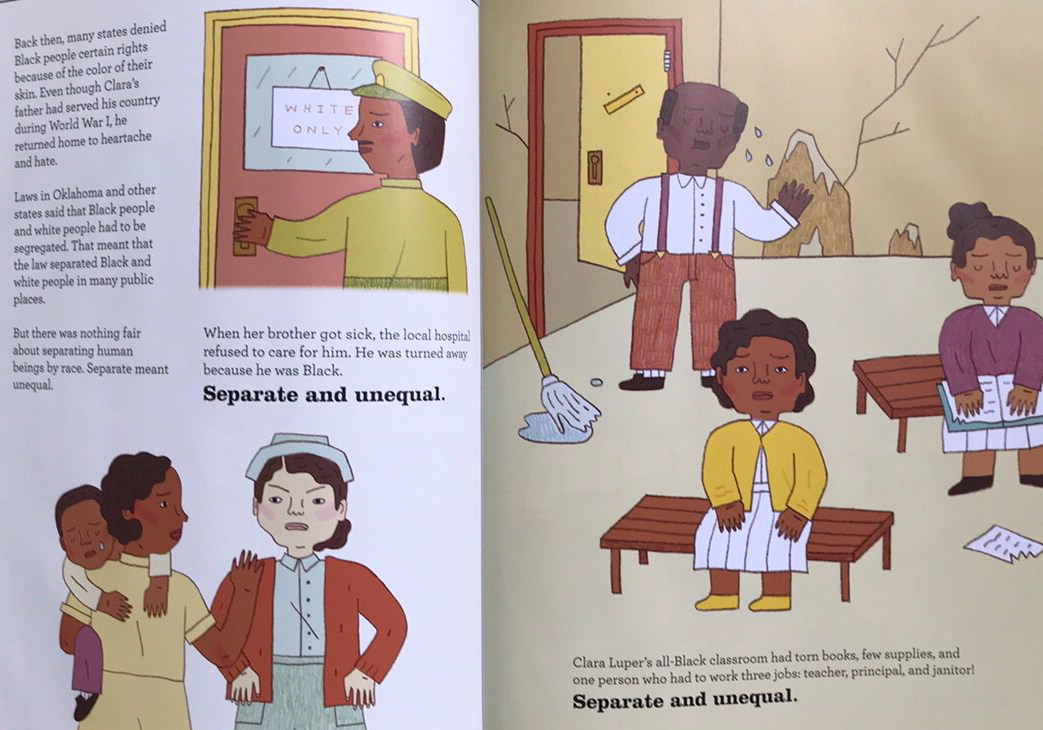 Back then, many states denied Black people certain rights because of the color of their skin. Even though Clara’s father had served his country during Word War I, he returned home to heartache and hate. Laws in Oklahoma and other states said that Black people and white people had to be segregated. That meant that the law separated Black and white people in many public places. But there was nothing fair about separating human beings by race. Separate meant unequal. When her brother got sick, the local hospital refused to care for him. He was turned away because he was Black. Separate and unequal. Clara Luper’s all-Black classroom hat torn books, few supplies, and one person who had to work three jobs: teacher, principal and janitor! Separate and unequal.

…all the way to New York City! In New York, like most integrated Northern cities, Clara Luper and her students did not have to eat outside. They could sit at lunch counters and eat with everyone else. They saw Black and white people eating side by side. Everything they ate tasted so good, sprinkled with hope, spiced with justice. Clara Luper showed her students that in some places, someday was now.

When they got back to Oklahoma City, the students remembered Clara Luper’s lessons. They remembered Dr. King and the Montgomery Bus Boycott. Then Clara Luper taught them about investigation, negotiation, education, and demonstration. With these four steps of nonviolence, the students were prepared to make sacrifices for justice. Clara Luper’s students approached white shopkeepers about opening their stores and restaurants to all people, all the time. The students hoped that their white friends and neighbors would do the right thing if they spoke to them the right way. Day by day, month after month, for more than a year, Clara Luper helped her students write letters and meet with the shopkeepers. But those business owners wanted to keep WHITES ONLY. They did not believe in someday. 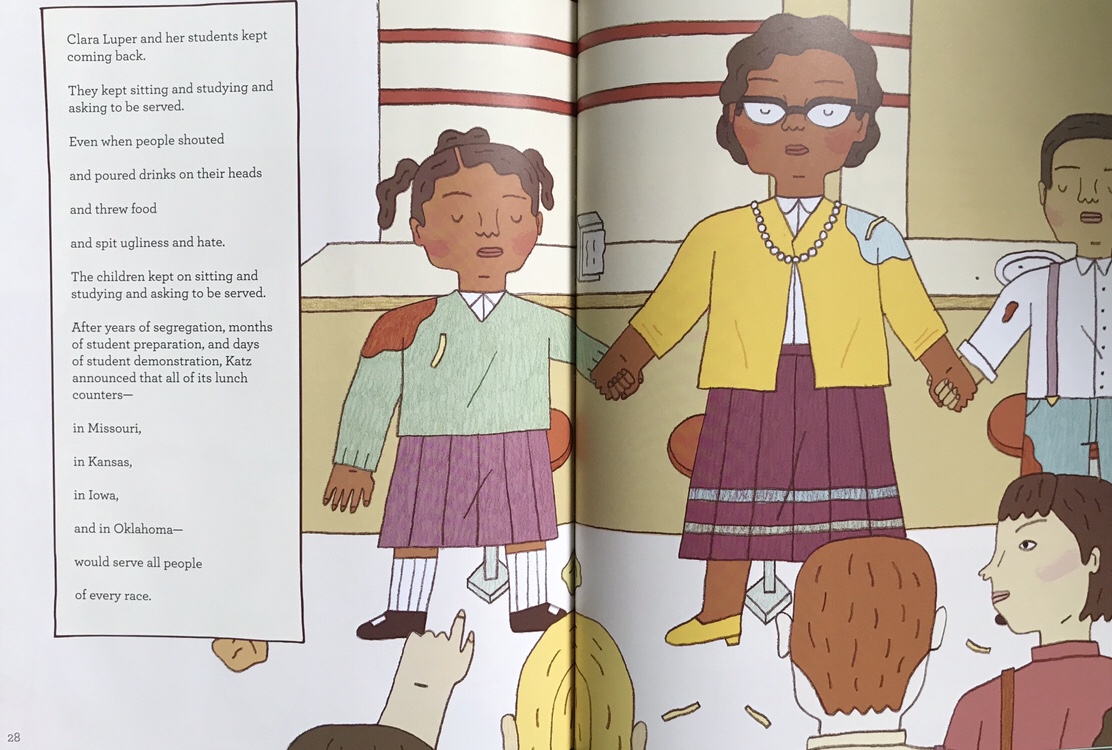 Clara Luper and her students kept coming back. They kept sitting and studying and asking to be served. Even when people shouted and poured drinks on their heads and threw food and spit ugliness and hate. The children kept on sitting and studying and asking to be served. After years of segregation, months of student preparation, and days of student demonstration, Katz announced that all of its lunch counters — in Missouri, in Kansas, in Iowa, and in Oklahoma — would serve all people of every race.

If You’re Going to a March by Martha Freeman, illustrated by Violet Kim

If You’re Going to a March

by Martha Freeman, illustrated by Violet Kim (Sterling; ages 5+) is a fun and energetic guide to participating in a peaceful protest.  Simple how-to steps (e.g. wear sturdy, comfy shoes) are blended with more general information (e.g. there will be reporters there) to paint a clear and realistic picture of what to expect when participating in a march.  With an author experienced in “marching, sitting in, carrying signs, wearing armbands, writing letters, and otherwise supporting American democracy since she was in middle school” it is no wonder that the book is clear and comprehensive, covering everything from busy parking lots to polite engagement with people who disagree. Colorful and cheerful illustrations give it automatic appeal to kids and have mine eager to make signs and find a march to join.  The overall effect is a book that quickly educates, motivates, and encourages readers to step out and march for something they believe in.  Even if you’ve never joined a march before, one reading of this fantastic book will have you feeling capable and eager to join others in peaceful protest.

Since you’re going to be outside, be sure to check the weather. You’ll want layers for cold, and umbrella for rain, or a hat and sunscreen for sunny days. Wear sturdy, comfy shoes. Travel light, but pack snacks and water. 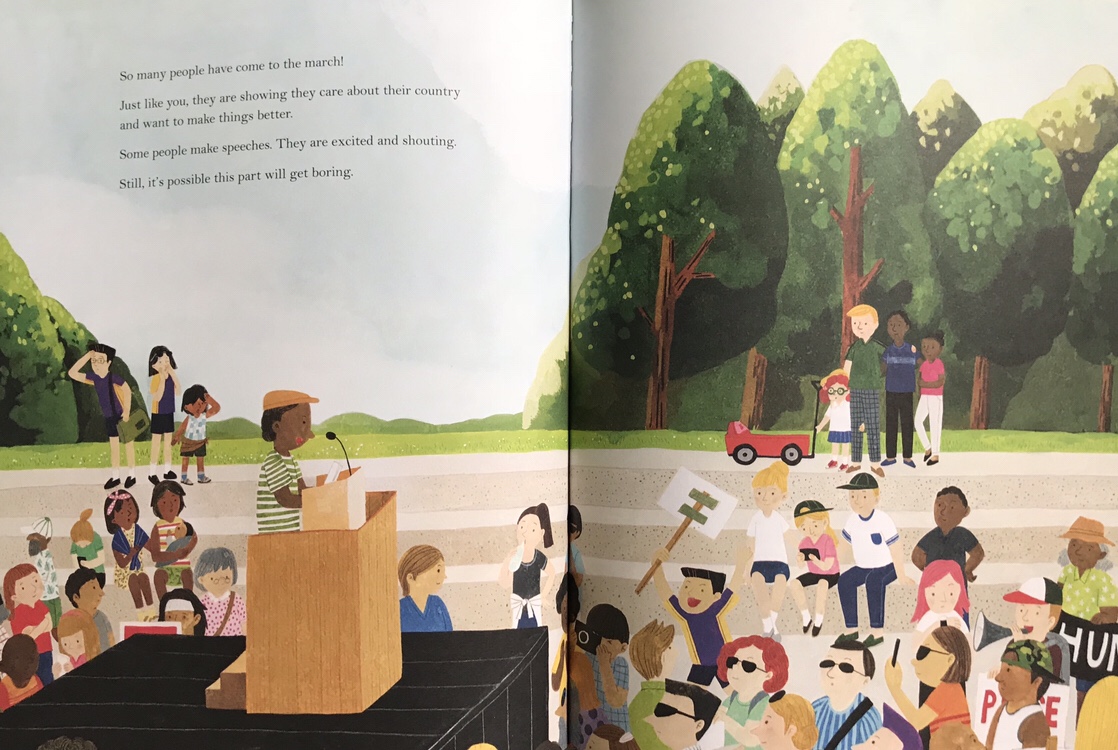 So many people have come to the march! Just like that, they are showing they care about their country and want to make things better. Some people make speeches. They are excited and shouting. Still, it’s possible this part will get boring.

If you’ve made a friend, ask them to wait up. There will be police officers at the march. Their job is to keep people safe. Some of them ride bikes.

Maybe you will sing a good old protest song like “We Shall Overcome.” Look around at your family, your friends, and your neighbors singing. Strangers are singing, too — all of you together, all of you caring. Now you know for sure why you came to march today: THERE’S A WARM FEELING IN YOUR HEART. 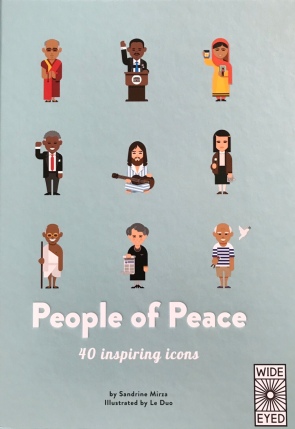 by Sandrine Mirza, illustrated by Le Duo (Wide Eyed Editions; ages 7-10) profiles 40 individuals who have used their talents and passions to peacefully fight against violations of human rights around the world.  Included are well known figures such as Gandhi and Nelson Mandela in addition to lesser known people like Rigoberta Menchú, who fought against the persecution of indigenous Guatemalans. A two-page spread is dedicated to each individual with basic identifying information and salient facts including awards and arrests.  Their individual contributions are briefly described along with salient information about the political, cultural, and social context of their actions. Each profile can be read quickly, but contains a wealth and depth of information belied by its brevity.  The end product is a compilation of inspiring figures from diverse backgrounds and with diverse skill-sets (i.e. politicians, painters, musicians, athletes) that have made a positive and lasting impact in the world via nonviolent means.

Overall, this book is dense with information, inspiration and possibility.  It could be used in the study of specific people during specific eras (e.g. Eleanor Roosevelt) or as a platform to introduce studies of specific historical events (e.g. Vietnam Conflict).  For homeschoolers, self-directed study could start with the choice of an individual and then expand into the associated historical events or cultural context.  Most importantly, it’s a book with the power to ignite compassion for others and hope for a better future shaped by people driven by positive, humanist values like those it features.

Victor Schoelcher In 1828, Frenchman Victor Schleicher traveled to Mexico, Florida, Louisiana, and Cuba on a business trip. He realized how appallingly the slaves there were treated, and became leading figure in the abolitionist movement. Appointed undersecretary of the navy and the colonies as part of the provisional government of the brand-new Second Republic, he wrote the decree abolishing slavery in all French colonies signed on April 27, 1848. But the government rejected his proposal to compensate the former slaves and grant them plots of land.

Martin Luther King Reverend Martin Luther King was one of the main leaders of the African American civil rights movement, which demanded the right to vote and fought racial oppression. In 1955, he organized the Montgomery bus boycott, and in 1963 he was one of the leaders of the peaceful March on Washington for Jobs and Freedom. His nonviolent actions met with success, leading to the passing of progressive laws in 1964 and 1965 that abolished the principles of racial discrimination.

Tenzin Gyatso Tenzin Gyatso, the 14th Dalai Lama, was 15 years old in 1950 when the brand-new People’s Republic of China invaded Tibet. Nine years later, he fled occupied Tibet and went into exile in India. Since then, he has dedicated his life to finding a nonviolent solution to the “Tibetan question.” He has appealed to the UN for support and travels the world to rally different countries to his cause. His efforts have won him plenty of support and great popularity — but have not helped him to influence Chinese policy. 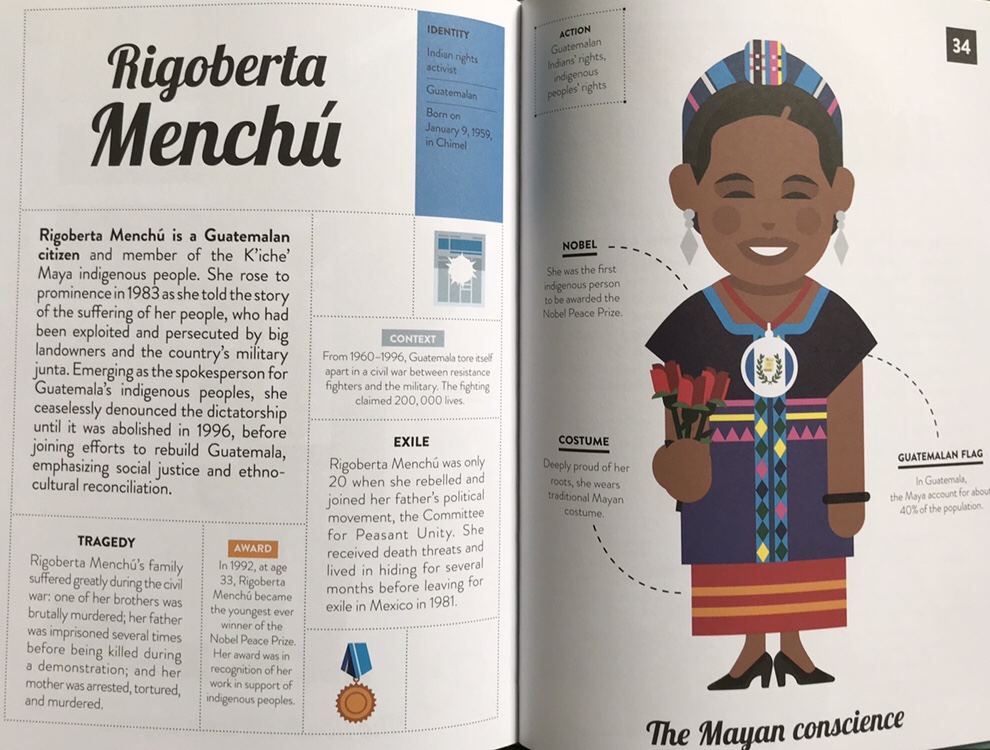 Rigoberta Menchu Rigoberta Menchu is a Guatemalan citizen and member of the K’iche’ Maya indigenous people. She rose to prominence in 1983 as she told the story of the suffering of her people, who had been exploited and persecuted by big landowners and the country’s military junta. Emerging as the spokesperson for Guatemala’s indigenous peoples, she ceaselessly denounced the dictatorship until it was abolished in 1996, before joining efforts to rebuild Guatemala, emphasizing social justice and ethnocultural reconciliation.