Zachariah OHora is the illustrator of the New York Times best seller Wolfie the Bunny. His debut as an author, Stop Snoring Bernard! won the 2011 Society of Illustrators Founders Award and was the 2012 State of PA Dept of Ed One book. His follow up, Not Fits Nilson! was named the Huffington Post Best Children’s Book of 2013, a Kirkus Best Picture Book of 2013, a New York Public Library Book for Reading and Sharing and was given the PALA Carolyn W. Field Award. His book My Cousin Momo! was named by the Boston Globe a Best Picture Book of 2015 and was a Junior Library Guild Selection. He lives and works in Narberth, PA with his wife, two sons and two cats. Thank you, Zachariah, for joining me in this interview!

I find the characters in your illustrations magnetic. The distinctive color palette and line work are eye-catching, but it’s the energy and emotion in your characters that really sets the hook. What is your process for character development?

I’m always looking for cute animal pictures, and when I find one I’ll do a drawing based on it. Then I’ll add a hat or some sneakers and before you know it, there’s a character. Often they are created under mild duress as I have done something to make my wife mad at me and the best way to beg for forgiveness is with a really cute, hand-made card.

You are a prolific illustrator and your work includes: Wolfie the Bunny

(2013) with Lisa Wheeler; and your own author-illustrated Stop Snoring, Bernard!

(2016). Does the experience differ when illustrating for your own writing?

It is different. First of all, I find writing to be extremely difficult and torturous. I can come up with characters all day long. But putting them in a story that has a beginning, middle and an end is the hard part! The best part of working with other people like Ame is that they have ideas that I would never think of. It’s a joy to expand on the world the author has created and the best ones have stories that are wide open for interpretation. If I see a lot of art notes that are beyond explaining some obtuse and short text, I get nervous.

Your books always contain an element of humor. Was this an intentional direction in your career?

I’m always striving for funny and a little weird. I’m always trying to have humor for the child and a whole other level for the parent that is going to read the book a million times over. (Hopefully!) The funny visual stuff or weird situations are what cracks me up when I’m working on it. If I find myself laughing while painting or writing, I feel more at ease that the book will have an audience.

Are there any other genres you’d like to illustrate or write?

Sometimes I toy with the idea of making some graphic novel-ish picture books. Ones with more sequential art anyway. I just finished one that I played with those elements a little for Chronicle Books. It’s called Bikes for Sale and its like a Rom-com for fuzzy friends, its written by Carter Higgins and its really good!
Every once in a while I think about doing a sort of YA graphic novel based on my own teenage years. I moved out of my house when I was 16. When I was 18 I hitchhiked cross-country and I had some life changing adventures. But then again- I’m lazy, it just seems like a lot of work.

You’ve spoken in past interviews about the influence of picture books in your childhood. Is there a particular book that sparked a desire to become an illustrator and/or author?

There are a few. One of my favorite books as a child was Father Fox’s Pennyrhymes

. Written and illustrated by the amazing sister duo of Clyde and Wendy Watson. I wanted to live in that world. The trees that Wendy draws are amazing! In parts the foxes are kind of nasty to each other and my cousin and I were very impressed by their bad behavior. 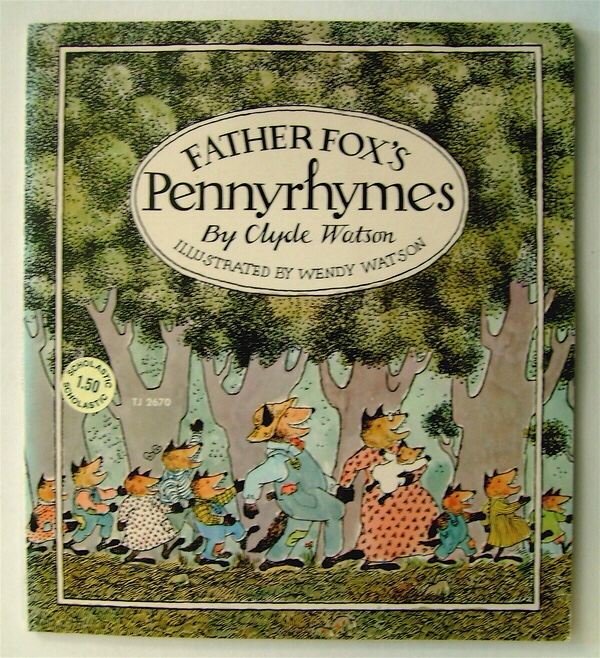 I’m hugely influenced by Richard Scarry and the Busytown books. I steal everything I can from that guy. Even Nilson, the gorilla from No Fits Nilson! Is based around Richard Scarry’s Bananas Gorilla. Right down to the puzzling multiple watches he wears.
Art-wise Syd Hoff and Margaret Bloy Graham have been pretty profound mentors to me. The thick-black lines and color palettes are things that I relate to.

Has being a parent changed the way you experience or evaluate past childhood favorites?

When I started pulling out my favorite books from childhood to read to them it changed my idea of them drastically in some cases. I love Richard Scarry but try reading Richard Scarry’s What Do People Do All Day? (Richard Scarry’s Busy World)

to your three year old! You will be up all night trying to read it all and they wont get it! That was eye-opening. I hid those after a while.

as a kid but reading it to my kids today, I have more sympathy for the parents who are dealing with a kid who is a brat. Its strange when you cross over from identifying with the young protagonist in a familiar story to siding with the parental side. Although, maybe that’s what a good story will do, it will grow and change along with the reader.

What advice do you have for kids dreaming of illustrating or authoring picture books one day?

Keep drawing, writing and dreaming. It’s the best job in the world. All the “professionals” out there have moments where they feel like a fraud. You know, THIS book is the one that I’m going to get called out on that I don’t know what I’m doing! I’m literally making this up as I go along.

But that’s the beauty, its your job to make it up! So making it up when you are in 4th grade or 40 years old, its all the same thing.

Create the world you want to live in.