Use this collection of books to introduce basic math concepts to young readers in a fun and accessible way!

Counting sheep turns into a late night gathering of wooly and unruly animals in this imaginative introduction to counting by sets. When counting individual sheep fails to induce sleep, a young girl begins counting sets of yaks, llamas, and alpacas in groups of 2, 5, and 10 until she’s reached 100 animals. As she does so, each animal manifests in her room. Climbing bookshelves, wearing lampshades as hats, and playing with her toys, they make for poor houseguests! Fed up with the noisy disruption, she begins subtracting the groups from 100, which transforms each animal into a length of yarn. The book closes as Clarissa finally falls asleep tucked  in under her new woolen afghan.

) as we read along, which provides tactile reinforcement and turns story time into a hands-on lesson. Easily pulled apart then reassembled by small hands and organized into colorful sets of 10, these Mathlink Cubes have been a great tool for my young kids! 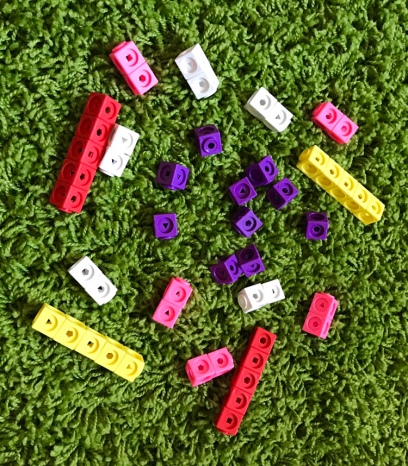 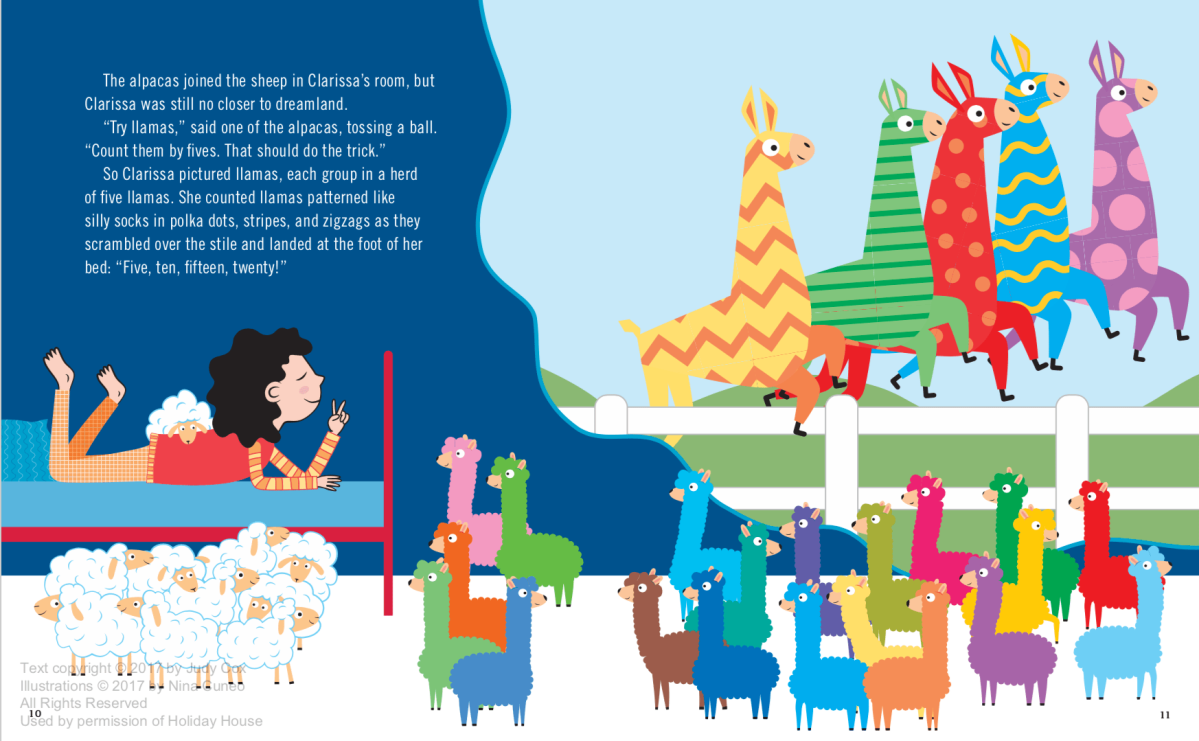 The alpacas joined the sheep in Clarissa’s room, but Clarissa was still no closer to dreamland. “Try llamas,” said one of the alpacas, tossing a ball. “Count them by fives. That should do the trick.” So Clarissa pictured llamas, each group in a herd of five llamas. She counted llamas patterned like silly socks in polka dots, stripes, and zigzags as they scrambled over the stile and landed at the foot of her bed: “Five, ten, fifteen, twenty!” 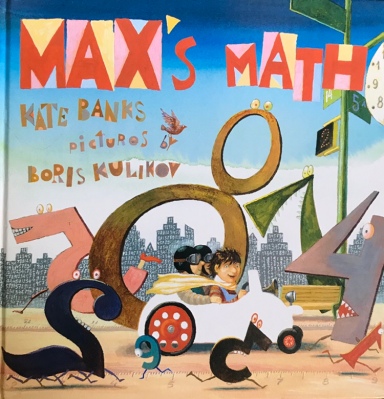 Following Max and his brothers in their imaginary car, we adventure to Shapeville and Count Town in search of missing numbers needed to complete the countdown for Count Town’s big rocket launch. After saving the countdown and sharing in the town’s celebration, the boys drift to sleep while counting sheep—a great ending for a bedtime read.

This book is a fun and quirky introduction to basic mathematical concepts such as counting, number sense (knowing how to assess and express the quantity in a set), number operations (how quantities change when sets are joined together or separated), shapes, and spatial relationships. The magic lies in the surrealist-style images packed with numbers and shapes in unexpected places giving these concepts depth and interest not found in purely instructional texts. A fantastical story, in every sense of the word, this is a great book for demonstrating that math can be a approached in a fun and creative way.

Paired with toy numbers, the book becomes a numbers spotting and matching game for the earliest learners. Follow-up with manipulative shapes (we use these foam shapes: ETA Hand2Mind Giant ManipuLite Foam Floor Pattern Blocks, Set of 49

)  to recreate images from the book for a great spatial relationship exercise and introduction to fractions. 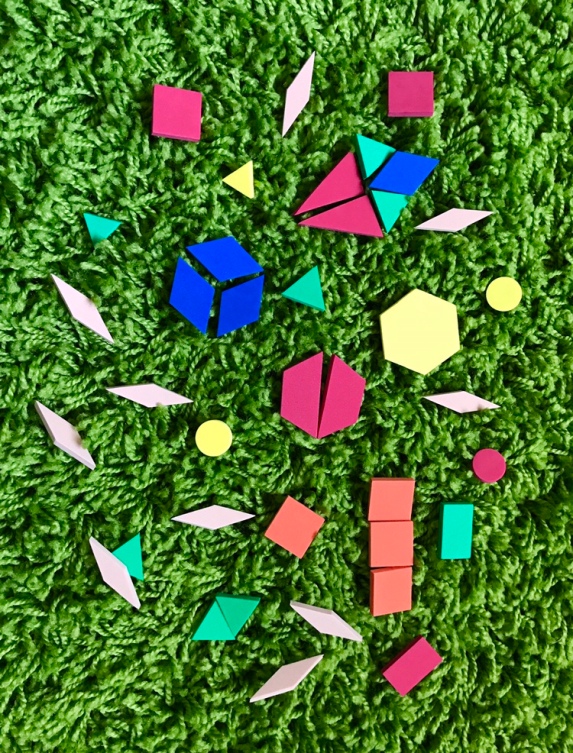 He cruised down the highway past 10 vehicles: 2 buses, 3 trucks, and 5 motorcycles.

Ben and Karl joined them. Ben made a sign. Karl made a kite.

“Watch out!” cried Ben. But it was too late. They crashed through a clothesline, scattering socks in all directions. “Oh dear, my socks,” cried a young man. “Who will help me sort them?” “We will,” said Max. Max and his brothers sorted the socks into pairs and hung them back on the clothesline.

Banana for Two by Ellen Mayer, illustrated by Ying-Hwa Hu

An endearing board book perfectly sized for small hands, Banana for Two follows a mother and her young child on a routine trip to the grocery store. Playing games of peek-a-boo and conversing about each item as it goes in the cart, basic math concepts like number sense (knowing how to assess and express the quantity in a set) and number operations (how quantities change when sets are joined together or separated) are subtly intertwined into the story.

My kids were immediately enamored with this book, and it is often chosen for story time. But the real beauty of the book is how it translates to other day-to-day interactions prompting routine discussions of things like amounts, positions, and sizes. It also carries into the playroom, where the book’s conversation is incorporated into games of shopping, preparing, and portioning food.

Pair it with toy foods that can be “cut” and fraction cubes to round extend the lessons further! Shown below are some of our kitchen toys from Hape (Hape Gourmet Play Kitchen Starter Accessories Wooden Play Set 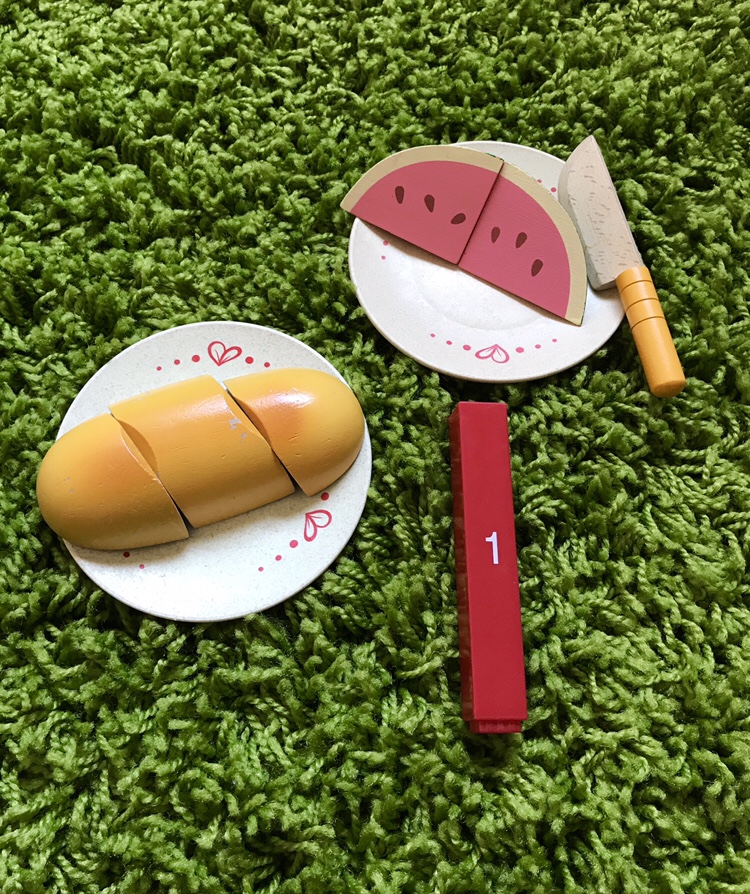 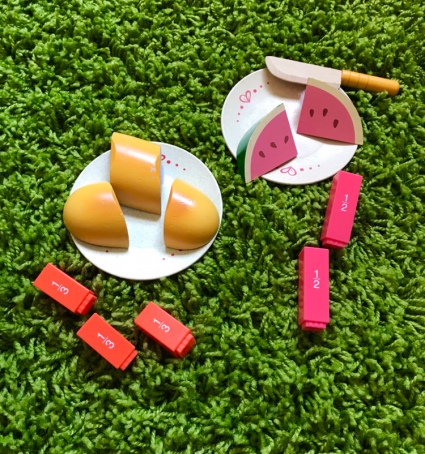 “Here’s your favorite cereal,” says Mama. “MORE!” “We don’t need more—just one box. Peek-a-boo! Can you see just one eye?”

“The two of us are hungry after shopping,” says Mama. “Let’s share the banana.” “TWO!” “Yes! Two pieces. Banana for two—one piece for me, and one piece for you.”